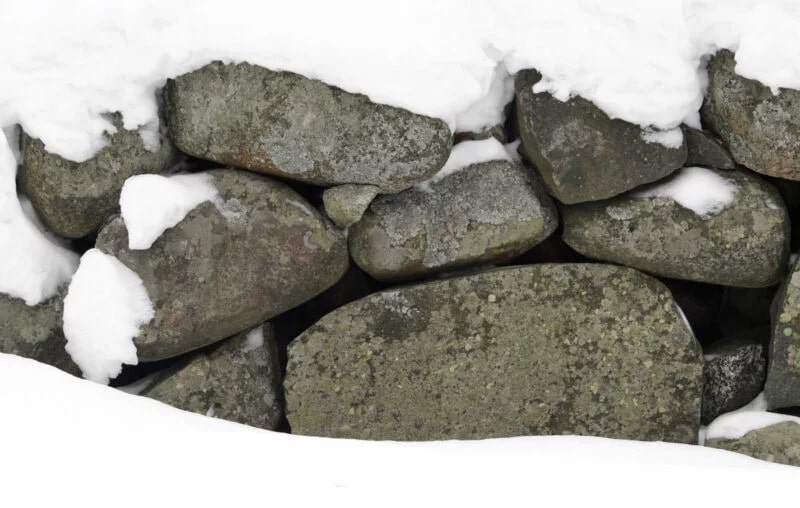 While the poem contains lessons about balancing tolerance and acceptance, modernity and tradition, and perhaps the efficacy of national borders, it remains open to interpretation. The surface-level message, repeated twice in the poem, is that “good fences make good neighbors,” which might simply suggest we demarcate property if we want to live comfortably with our neighbors. We should also read the poem to motivate larger conversations about social cooperation and economic development.

The Surface of Mending Wall

The poem focuses on two neighbors who meet to rebuild a shared, crumbling wall, presumably in New England, where Frost lived and where stone walls are common.

An awkward introductory phrase directs readers to the poem’s object: “Something there is that doesn’t love a wall.” In the opening lines, we learn that the wall deteriorates through passive and active forces: water freezes and expands during colder months, and hunters on horseback knock pieces off. Both neighbors regularly face the task of mending the wall.

The remainder of the poem is a back-and-forth between the neighbors, one who questions the purpose of mending the wall and one who accepts (perhaps blindly) the task. The questioning neighbor expresses his contempt for the project because the wall isn’t going to deter the apple and pine trees from moving across properties. The poem ends with the second incantation of “good fences make good neighbors” from the other neighbor.

The neighbor contemptuous of the mending process has a point, but he is ignorant of the larger role property rights play. This neighbor suggests that since neither neighbor has cows or other animals that might go astray, the costs of mending the wall outweigh the benefits. The more traditional neighbor is unmoved, however, as he seems comfortable in his perceived wisdom. He continues mending the wall and repeats, “Good fences make good neighbors.”

The wall is a means to clarify, monitor, and enforce property rights. Property rights establish expectations about how people can use resources according to their values and goals without interference from others. The wall does more than keep stray animals in place. It helps to maintain neighborly relations and create expectations about what is “mine and thine.”

With such expectations, people face incentives to make long term plans. The neighbors grow pine and apple trees, for example, which take many years of planning and maintenance. Having the wall, and having a yearly mending ritual, creates incentives to maintain those trees and allows the neighbors to pursue other plans.

The physical wall is jointly produced and a public good, which uncoordinated individuals often find difficult to produce. To varying degrees, such goods are non-rivalrous in consumption and costly to exclude, which indicates people are likely to free ride and, perhaps, produce too little of the good. The neighbor who questions the mending process, for example, could let the other neighbor mend the wall alone and nonetheless receive the same benefit.

As the poem suggests, mending the wall is easier with two people, which suggests free riding would make the mending process more costly:

If free riding were to persist, the wall would continue to erode.

Fortunately, the neighbors are not entirely uncoordinated. Frost’s poem hints at how the neighbors cooperate, namely through common experience and history, and tradition. Referring to the gaps in the wall, one neighbor states:

No one has seen them made or heard them made,
But at spring mending-time we find them there.

Spring is not just the time to enjoy the outdoors again, it is the customary time to address this unique problem the neighbors face. The mending process, according to one neighbor, has been performed so much it is like an “out-door game.”

We even know that the “good fences, good neighbors” saying does not originate with the current neighbors. Referring to one of the neighbor’s seemingly blind acceptance of mending the wall:

He will not go behind his father’s saying,
And he likes having thought of it so well

Studying how people resolve problems like mending the wall provides lingering lessons about cooperation and self-governance.

The neighbors can easily communicate with each other, have a shared history, and probably expect to work with one another for many years to come. According to Michael Taylor, each of these factors encourage cooperation and the search for agreements and rules that facilitate cooperation. Overall, each factor suggests Coasian solutions are likely, as transaction costs are relatively low.

Such conditions seem similar to David Hume’s discussion of two neighbors draining a meadow. In A Treatise of Human Nature (Book III, Part II, Section VII), Hume suggests that cooperation between two neighbors attempting to drain a meadow is likely because they “know each other’s minds.” Cooperation follows from their mutual interests and common knowledge about their neighbors.

If we had more details about Frost’s neighbors, we could delve deeper into the conditions that encourage people to manage common resources, as discussed by Elinor Ostrom. As Ostrom notes, successful management of these resources is likely the more people who use the common resource make their own rules. Mending Wall is just a poem, but there are myriad stone fences throughout New England, and the world, where such logic seems relevant.

Robert Frost’s masterful poem gives economists and students many opportunities to learn about property rights, self-governance, and peaceful cooperation. Providing these kinds of goods might be relatively easy, especially when people face relatively low transaction costs and can govern themselves. At the same time, social phenomena like rules and traditions become more useful, even if people don’t know why they are following them.

This article is courtesy of Byron B. Carson, III and American Institute for Economic Research, under a Creative Commons Attribution 4.0 International License. The original can be found here.